This shrimp rasta pasta recipe is made with peeled shrimp, jerk seasoning, and fresh veggies. It’s super easy to make gluten free, dairy free, or completely vegan. It’s ready in under 30 minutes and is incredibly versatile. Quickly made in a skillet, go ahead and add extra veggies to make it your style!

No time to read now? 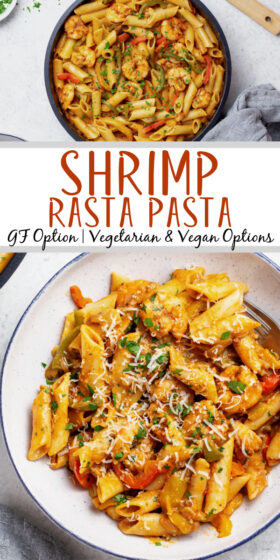 For this shrimp pasta you start with 2 cups of penne pasta, olive oil, and a pound of peeled and deveined jumbo shrimp. You’ll also need jerk seasoning, 3 bell peppers (one green, one red, and one yellow), 3 chopped green onions, and a diced yellow onion.

To start the recipe you start by seasoning the shrimp in a bowl with half of the jerk seasoning. Coat it well and let it marinate for about 15 minutes. While the shrimp is marinating cook your pasta according to instructions. Before draining the pasta, keep a cup of the water and set it aside.

Next, in a large skillet, add the shrimp over medium high heat and cook for about 2 minutes on each side. We’re just searing them so don’t overcook since they’ll finish cooking in the pasta later on. Once they’re seared transfer them to a plate for later.

Now add the bell peppers and onions to the skillet and sauté them for about 2 minutes. Just until the onions are translucent and the peppers are still a little bit crisp or fork tender.

Sprinkle the last half of the jerk seasoning onto the vegetable along with the garlic, paprika, allspice, salt, and pepper. Stir and get them evenly coated and continue sautéing for about another minute.

Pour in the chicken stock and deglaze the skillet by scraping up any of the brown bits on the bottom and immediately reduce the heat to medium and add the heavy cream.

Stir it together and then add in the shredded parmesan and mozzarella cheeses and continue stirring until everything is combined and the cheese is melted in.

Now we add in the cooked pasta and stir it into the sauce. Slowly add the pasta water little bits at a time while stirring until the sauce is at your preferred consistency.

Add the shrimp back into the pan and stir it together. Cook for 1-2 minutes until the shrimp is heated through.

Making this recipe vegetarian is super easy! Start by omitting the shrimp. From there add different vegetable of your choosing. Try some of my favorites such as sliced mushrooms, zucchini, and eggplant but use your imagination and use your favorites.

To make this rasta pasta completely vegan, swap out the heavy cream for coconut milk or coconut cream along with skipping the shrimp. You can omit the cheese or swap for a diary free variety you like.

If you’re using a dairy free cheese, add it in at the end instead of mixing it into the sauce in the earlier step. Add veggies to your liking just like the vegetarian steps and you’re good to go!

Serve this shrimp rasta pasta all on it’s own, or with a fresh salad or a side of you’re favorite roasted veggies. Another option is to serve with biscuits or even mashed potatoes/cauliflower mash. The sauce works as a “gravy” for the potatoes or cauliflower mash.

To store this recipe let it cool to room temperature and add it to an airtight container and refrigerate. I prefer to use the individual meal prep containers for this since it’s a great quick lunch and reheats really well. Either way it will keep in the refrigerator for about 5 days.

HUNGRY FOR MORE? Subscribe to my newsletter to get new recipes delivered straight to your inbox! And be sure to stay in touch on Facebook, Instagram,  and Pinterest for all of the latest updates.

PS. If you’ve made this recipe, don’t forget to rate this recipe and let me know in the comments how you liked it! 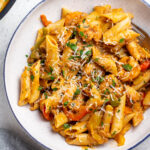 Did you make this recipe?
Leave a review

1. Season the shrimp with 1/2 of the jerk seasoning and let marinate for about 15 minutes

2. While the shrimp is marinating, cook the penne pasta according to the instructions. Reserve 1 cup of pasta water before draining

3. Heat the olive oil in a large skillet on medium-high heat. Add the shrimp to the skillet and cook for 2 minutes on each side. Do not overcook, just sear them being they will be added back into the pasta later and will finish cooking. Transfer the shrimp to a bowl or plate and set aside

4. Add the bell peppers and onions into the skillet and sauté for 2 minutes, until onions are translucent, and the peppers are still a bit crisp/fork tender

5. Sprinkle the remaining 1/2 of the jerk seasoning over the vegetables, as well as the garlic, paprika, allspice, salt and pepper. Stir into the vegetables to evenly coat while sautéing for another minute

6. Add the chicken stock to the skillet and deglaze by scraping up any brown bits on the bottom. Immediately after, reduce the heat to medium and pour in the heavy cream

7. Stir to combine the heavy cream into the vegetables and spices and then stir in the shredded mozzarella and shredded parmesan cheese. Stir it until it’s melted and combined

8. Add in the cooked pasta and stir it into the sauce. Slowly stir in pasta water a bit at a time until the sauce is the consistency you prefer

9. Return the shrimp into the pan, stir to combine into the sauce and pasta, and let cook about 1 to 2 minutes, or until the shrimp is heated through

This shrimp rasta pasta post may contain some links that are affiliate links, though products are ones I use personally and recommend. When you purchase anything using my links, it costs you absolutely nothing extra, but it does give healthyheartyrecipes.com a little financial support which helps to keep this blog running. Thank you for your continued support, both with your dollars and your interest. 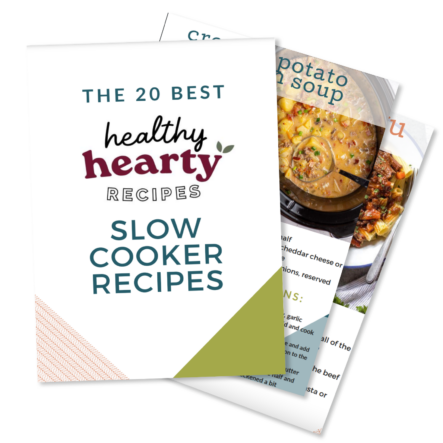 sign up for my newsletter and receive my 20 best Whole30 recipes! 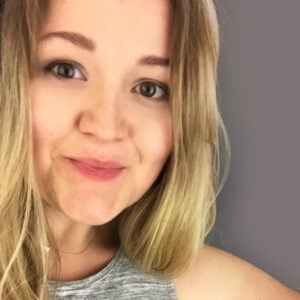 I’m Bailey! I love sharing comforting, cozy recipes that call to my hearty midwestern roots, and I’m often finding ways to make them juuuust a bit healthier! When I’m not cooking, I’m cuddling with my rescue pups. Probably reading.

This instant pot buffalo chicken pasta is an easy one dish meal that can be made gluten-free. It comes together in 30 minutes, requires very little hands-on time,…

END_OF_DOCUMENT_TOKEN_TO_BE_REPLACED

This slow cooker vegetable curry is the easiest set it and forget it meal. It’s awesome for a meatless dinner or vegan lunch recipe that is simple to…

END_OF_DOCUMENT_TOKEN_TO_BE_REPLACED

This garlic chicken gnocchi skillet is the perfect simple recipe for a quick weeknight dinner. It’s easy, done in 30 minutes, and can be made gluten-free! Juicy chicken… 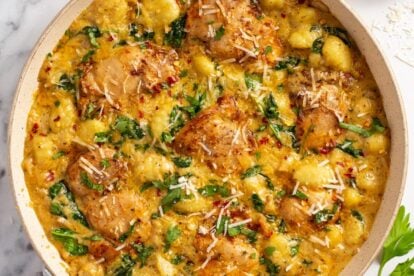 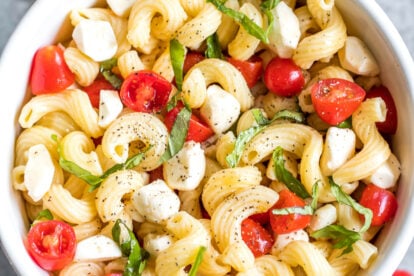 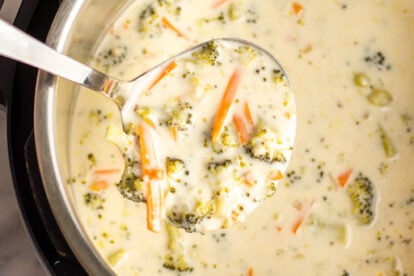 END_OF_DOCUMENT_TOKEN_TO_BE_REPLACED

GET a free eBook of my 20 best crockpot recipes